A group of talented, young students gathered this afternoon in the Culture Center of TECRO in Gaithersburg, Maryland to receive their Rho Psi Scholarship award. The award ceremony was preceded by acknowledgments from various Rho Psi committee members and concluded with a performance from a few award winners. Every year, the Rho Psi Foundation allocates $50,000 to reward local Asian American students from the Greater Washington and Baltimore area for their extraordinary performance in extracurricular activities and community service. The individual scholarships ranged from $50 to $4000 for honorable mentions and first place winners, respectively. For the 2017 awards, the categories for the scholarship included: Science and Technology, Leadership and Service, Arts, Sports, and Need Based. Scholarship winners were divided based on age and category, with kids ranging from preschool to early college. Students, such as Rachel Li, aged 17, received a first place reward for her Leadership and Service contributions to the community. Working as an editor-in-chief for her high school newspaper, she has also spent past summers with Youth Building Bridges (YBB) to teach children in Gansu, China. She currently spends her time outside of school working as a junior reporter for China Press and fighting for education related issues that could potentially benefit children all across the nation. Another notable scholarship winner, Ting Ting Cui, is a 14-year-old internationally ranked figure skater from Baltimore. Ting Ting spends seven days a week skating, most of which require her to commute between Maryland and Pennsylvania. Her achievements are enormous, from being the 2015 Intermediate Future Medalist to representing Team USA in 2017. Ting Ting received the first place reward for the 12 and older Sports Scholarship.

These two students are amongst the many who have demonstrated their ability at the Rho Psi ceremony. This long-standing tradition encourages young Chinese students to keep learning and to strive for their higher academic and social goals in the future. Centered around Mother’s Day, the scholarships reward both the students and their parents for their hard work and commitment. The Rho Psi Society, founded in 1916, hopes to foster a long-lasting community and friendship within the Chinese community and beyond. To read more on the Rho Psi Society and Scholarship, please visit rhopsi.org. 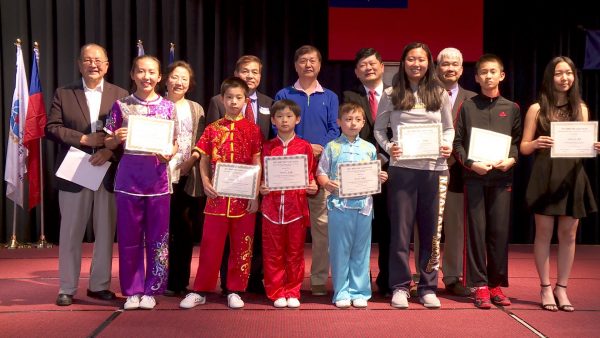